An excerpt from:  Boston and Beyond:  Tyre & Phoenix

Phoenix shared that Meredith Bergmann was the artist and that it was opened in 2003. Therefore, in comparison to other statues along the Mall, this was one of the newest. It was made of bronze and granite, but it appeared to have more of a bronze tone. Phoenix said, “The artist purposefully put these women high on a pedestal and she wanted the people to interact with these free thinkers.”

“I can see that,” said Tyre. Look at the scarf on,” and he paused. He walked over and read her name as he touched the neck scarf tied around Abigail Adams’ neck. “Abigail Adams, wife of President John Adams,” he continued. 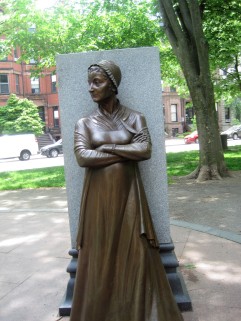 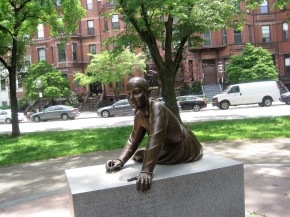 “Oh yes, there are books about the beauty of the love letters that they wrote to each other when he was traveling,” she laughed. Phoenix then sat next to Phillis Wheatley who sat with her pen in hand.

Tyre snapped pictures of her with his Smartphone and she later posed beside Abigail Adams and Lucy Stone. He also stood and sat with the women and Phoenix made sure that she had plenty of pictures of him to document the moment.