An excerpt from:  Boston and Beyond:  Tyre & Phoenix 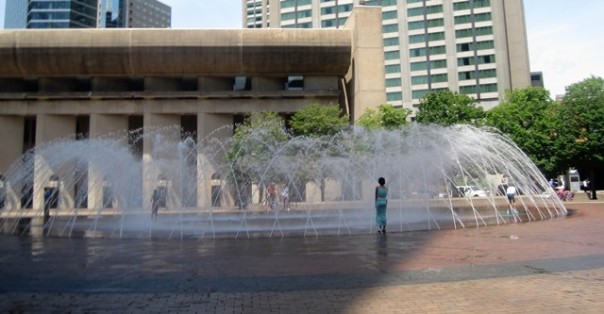 At the allocated time, Tyre and Phoenix left the Colonnade Hotel and headed south on Huntington Avenue and crossed the street to enter the plaza. The water sprinkler was dotted with laughing children as they played in swimwear and parents watched while seated on the concrete wall.

They could see that the Christian Science Plaza was also enjoyed by the community as they headed south towards the entrance of the church.  They walked pass the older original church which Phoenix mentioned. She had read that the founder, Mrs. Eddy had a reserved seat in this church and it could be seen by those who took the church tour. The older church was still used on a regular basis for certain services and activities.

They were  warmly greeted at the door of the newer edifice and a woman pulled a string to open the welcoming door. They silently noticed the inscriptions engraved into the walls throughout of the building. Some were scriptural quotes and others were quotes by the founder, Mary Baker Eddy.  This was a glorious start for their week long trip to the New England area.